Lagos, April 15, 2019: TGI Distri Limited has launched and announced the availability of Terra Seasoning Cubes in all markets across Nigeria. Terra Cubes is produced by West African Cubes (WACUB) Limited at its ultra-modern plant in Sagamu, Ogun State.

Mr. Sunil Sawhney, Managing Director of TGI Distri, stated that: “Terra Seasoning Cubes are a true cooking sensation allowing everybody to enjoy great taste. We are now releasing two variants; Beef and Chicken into the market. Both variants come in single cubes of 4gm. Terra Cubes have particularly been designed to meet the palate requirements of all Nigerians especially in terms of aroma and flavour. They are also designed to preserve the aroma of meals during and after cooking”.

“The response from product testers and early adopters have been very encouraging and we could not be more enthusiastic about releasing this seasoning revolution to the market,” he added.

Giving reasons for the choice of the brand’s pay-off line “Locks the aroma in; Gets the taste out”, Onubogu stated that Terra Seasoning Cube has been formulated and manufactured to preserve the aroma of meals during and after cooking.

Responding to a question on why he believes the new brand will be accepted by the market, Mr. Sawhney said: “We believe in studying the needs of our consumers and acquiring genuine insights into their requirements and demands. We respond to these requirements with better products and services that enhance the quality of life. We support our product offerings with strategic marketing and sales initiatives”.

Sawhney continued “we’re excited to be launching these new variants of seasoning cube into the market and we have no doubt that in a short period of time Terra Seasoning will gain competitive edge over other brands and control a large chunk of the market”.

“Terra Seasoning Cube is an outcome of painstaking research, it is many steps ahead of other brands in the market in terms of taste and aroma.  I enjoin everyone to try it”, he added.

There was also a lot fanfare and celebrations at the launch including a food tasting event. 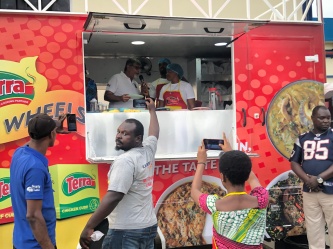 TGI Distri Limited is a member of the TGI Group, former owners of Chi Limited, producers of Chivita and Hollandia. The conglomerate has continued to grow, and owns other reputable companies such as Cormart (Nigeria) Ltd, WACOT Ltd, Chi Farms Ltd, WACOT Rice Ltd, among others.

TGI Distri Limited is the sales, distribution and marketing arm of TGI Group Companies’ Consumer Products and is the marketer of Terra Seasoning Cubes, Big Bull Parboiled Rice, Renew Starch, Shine All Dishwashing Liquid, Shine All Scouring Powder and many other notable Brands. TGI Distri also serves as the Innovation and New Product Development Centre for the TGI Group.

The Tropical General Investments (TGI) Group is an international investment and holding company with diverse interests. Operations of the group primarily span across developing economies in Africa, Middle East and Asia. The group's business interest covers manufacturing of packaged food and condiments, production of vegetable oil, cotton ginning, poultry and fish farming, processing and marketing of frozen foods, importation and distribution of industrial and agro chemicals, fish trawling and specialised oil services. The group has been witnessing significant growth across all the business verticals and has become a household name in many of the geographies it operates in with very strong brands and robust infrastructural presence. www.clicktgi.net View all posts by TGI Group